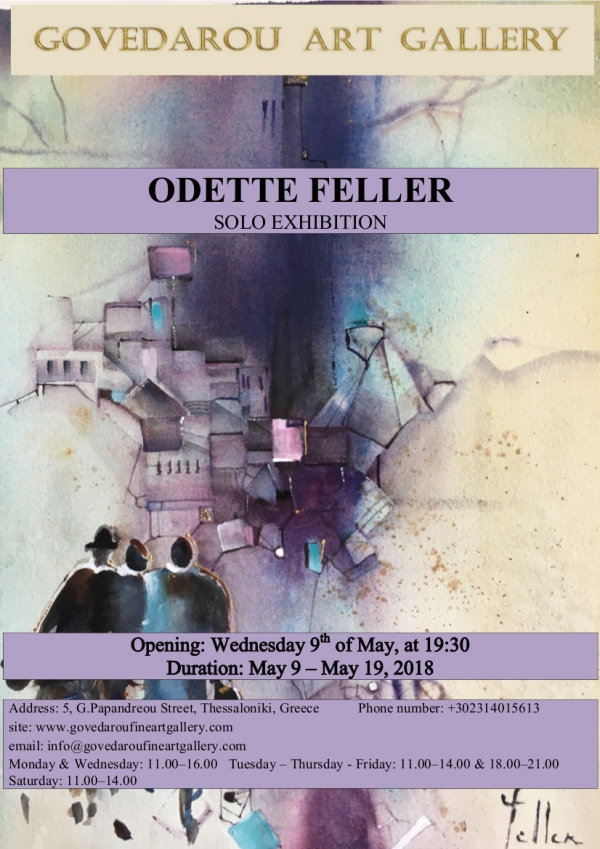 In her artistic approach, Odette FELLER wants to keep a freedom of movement, colors and shapes.

The chosen subject will be determined by chance and the result obtained by the spots of color, more or less diluted according to the humidity of the paper that she decides at the first brush stroke following her "instinct of the moment".

The second step is to look and see, this is what invites Odette FELLER to the reflection and especially to the main phase, the creativity, of this miracle of the fusion of colors, she must honor, these forms often indefinable, she tries to bring out the subject little by little. As if by a miracle of something "without a future" a real world appears as if to better secure the spectator of whom she claims to be always the first. For her, it is one of the privileges of the artist.

Watercolor being the most undisciplined medium, it gives Odette FELLER the freedom to accentuate its defects and its qualities by playing without restraint in the water and the free spaces that it offers to it, without overloading and leaving the beautiful effects often unexpected mixtures, the surprise and invites them to respect them leaving them a place in his paintings

Odette Feller says to be surprised often to have fun of the different effects caused by interfering in the drying times. Maybe that gives him the illusion of dominating, for a moment only, this magic of the marriage of water and pigment.

"In each work I try to reflect a general atmosphere, given by the choice of colors and a lightness due to free spaces. "