You are here: Home » NEWS & EVENTS 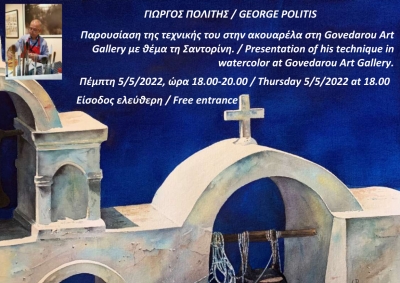 Govedarou Art Gallery, G. Papandreou 5 (former Antheon, Georgiou stop) organizes in its space the solo exhibition of the artist and internationally awarded watercolorist George Politis entitled "Santorini". Within the framework of the exhibition, a presentation of the painter's watercolor technique is also organized in the gallery space on Thursday, May 5, at 18.00. The topic on which the presentation will be made will be Santorini.

A few words from George Politis about this exhibition:
I visited Santorini for the first time in the summer of 2018. It was "love at first sight". Source of inspiration; How else to do it? The combination of the blue of the sky and the sea with the white (usually) of the houses and churches, the resulting contrasts, the transparency and the shadows (often intense, thanks to the dazzling light) give those elements that are reference points for watercolor. . Four years later, I continue my search in Santorini, trying to discover it step by step. And I'm sure the road is still very long… 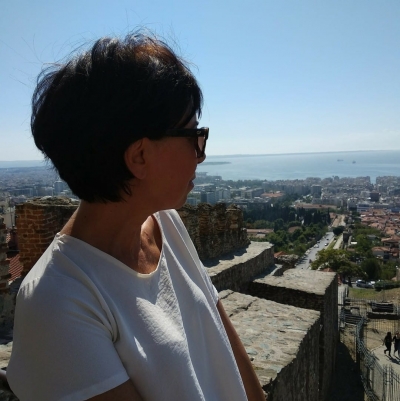 1. A characteristic of your art in the depiction of art is the complete lack of its savagery, why this choice?

I paint my last landscapes and figures with a greater peace of mind and stability than in the past. I am now in the phase of my life where every savagery has calmed down inside me and I am looking for the expression of the mildest emotions that give value to human life.

2. The main material of your works is oil, do you think this brings some limitations to the result or on the contrary releases it?

Art is not limited by materials. Whatever material you have at your disposal and whatever technique you use, you can achieve it as far as you wish and as free as your ideas and your spiritual horizons are.

3. What role does symbolism play for you in your work?

Symbolism is an element that is strongly present in every art form. In my personal work I choose to give the symbolism to a second level and not in an obvious way. The meanings of each painting work subconsciously in me and many times I discover things about myself and my works. That is, it is a process that happens on its own, most of the time.

4. Do you work on your works free from an image that acts as a guide, based solely on your imagination or not?

I get inspiration from something visible, concrete and my imagination creates the forms, the color harmonies. I add and subtract according to what I have in my mind to imprint on the canvas, in order to express the thoughts and feelings at any given time. After all, painting takes you where it wants to go. You start with something you have in mind and the result, often different, surprises you.

5. Landscapes of nature and places of the soul. How is this connection between nature and soul made?

I used to paint only figures because I believed that only with human figures could I give a part of my soul. Later I experienced an emotional connection with nature and each element of it separately and I realized how many thoughts and feelings can be born through this communication. After all, man is an element of nature and interacts with everything around him. Many times the elements of nature depicted in my paintings, such as the sea or a tree, have for me energy and soulful properties.

6. At first glance, your works gave me the impression of the momentary and immovable. Is this something you want to flow from your projects and if so why?

I want my paintings to be an imaginary occasion that either depicts a landscape or an emotion, in which the viewer can stay or feel it for a moment, or have it in his soul and body forever. I want time to be lost through my paintings, which is a social construction anyway and the moment to last as long as the viewer wants each time.

7. If you did not have the choice to depict nature in your works, what else would you choose as a point of expression?

As I mentioned above, I often use human forms as a means of expressing my painting. Beyond that, expression can come from anything. Like people, landscapes, still life. The issue is what will inspire you at every moment, what needs you have to express and how, either more subtly or more obviously, you choose the corresponding theme for your painting.

Interview of the curator Nikolena Kalaitzaki 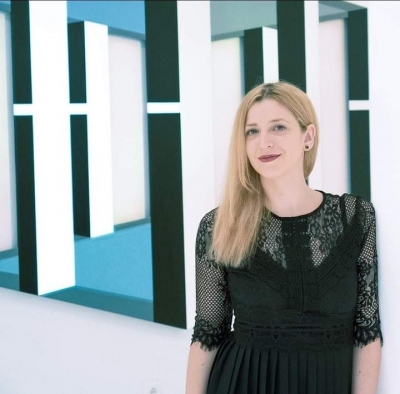 The inspiration of the curator of the exhibition Nikolena Kalaitzaki behind her choice for the title.

Nikos Kazantzakis' "Ascetic" is for me one of the most inspiring, spiritual creations that have existed over time. It is a majestic philosophical work, contemplative, with theological and political implications, which seeks to interpret and decode the meaning of human existence, which through constant and painful struggle, through battles, victories, defeats, joys, pain and sorrows, through the realization or frustration of his dreams, he succeeds with stubbornness and invulnerable inner fist to rise to the highest of the "superman" who can calmly, with heart, declare to the end: "I hope for nothing, I am not afraid of anything, [ ...], I am free ».

The works of the exhibition draw their inspiration from the book "Ascetic", with each artist quoting his personal visual narrative, which emerges through his spiritual interaction with this work. Thus, the works presented in the exhibition thematically deal with the eternal enigma of life and death, the joy and sorrow that accompany the moments of earthly, perishable and indestructible tour, and generally embrace the concept of freedom, attempt to give shape to soul, to travel us to the dark embrace of the abyss, to the vastness of heaven or to show us even God.

Nikos Kazantzakis "Ascetic"(work completed between 1922-1923) is a magnificent and timeless intellectual creation that manages to belong to every era. And this is because, his main distillate teaching, as I personally at least perceive it, is that man if he has faith in himself and mental endurance has the power to achieve everything against all obstacles, predictions and adversities of the path • is the very creator of reality who wants, from the heart, to live. There is, indeed, so much optimism behind it! "Ascetic" I feel that it shakes us from the misery of our comfort and tells us: "Get up now and Live! Reach your dreams! " And we often need that voice ...

The purpose of Art is to live through us and those who love it.Even if we ephemerals leave ... Art will breathe because it is immortal; at least the next generations will rejoice in Art (!). I chose Govedarou Art Gallery in Thessaloniki because I always work according to my heart, mind, intuition and instinct, both personally and professionally. And this gallery includes all of the above.

Kazantzakis always characterized his book “Ascetic” as a theological work. This can be seen in the participant artworks. I believe that the reader of an intellectual creation, a book in this case, as well as the viewer of a work of art has the freedom to interpret its content in the way they perceive it. Each of us sees, what one can see and respectively feels what one can feel. In case one can see or feel something further, this is good for his evolution. The adored Kazantzakis indeed characterized his work "Ascetic" purely theological and I certainly would not dare to go against it (!), But for me, for example, "Ascetic" is something beyond that, "a hymn of life", an excellent "self-improvement manual" that provides food for thought and action. 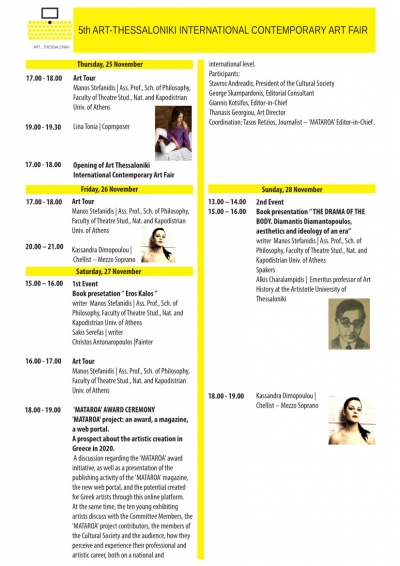 We are delighted to announce that Art-Thessaloniki International Contemporary Art Fair is back with the
5th edition returning November 25-28, 2021, with our slogan: Distribution - Briefing - Amusement - Safety.
We suggest you to participate because:
* Art-Thessaloniki Fair is an attraction pole for many important collectors from Greece (Portalakis, Andreadis,
Kopelouzos, Konstantinidis, Vernikos etc.) and also collectors from Europe, Balkan, Israel, Russian, Turkey, who
are interested in coming to the Art Fair.
* It is organized in a city open to fresh ideas, hospitable and safe. Thessaloniki is a strategically important
geographic location witch connect Europe with Asia and it is has good chances to become a communication
platform between many countries.
* Art-Thessaloniki Fair is the largest cultural event in S.E. Europe, exhibiting more than 1000 new art works by
emerging and established artists, Greek and international, becomes the perfect destination to discover and
collect art.
* Greece during the pandemic COVID-19 proved that it is one of the safest countries in Europe. Vaccinations
continue according to schedule and by the end of July 80% of the population will have been vaccinated.
* Despite the difficulties that existed in our country we succeeded in creating a good climate which leaded to
important deals in the 4th Art-Thessaloniki Fair with prices from 1000€ - 60000 € with visitors exceeded 18000!
* With collaboration with TIF-HELEXPO S.A, the National Agency for The Organization of Exhibitions, Congresses and
Cultural Events and Pantelis Tsatsis, Art Director. 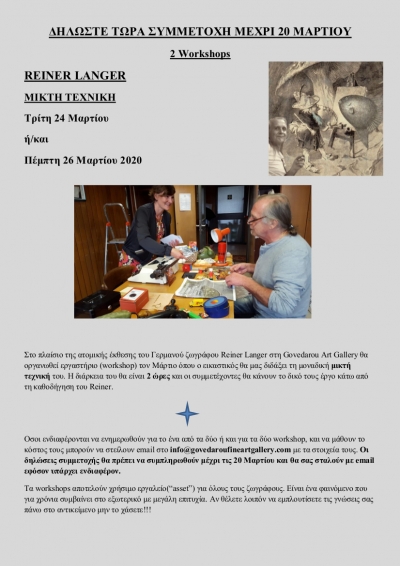