You are here: Home

"I Feel, then I Exist" solo exhibition of Irantzu Lekue 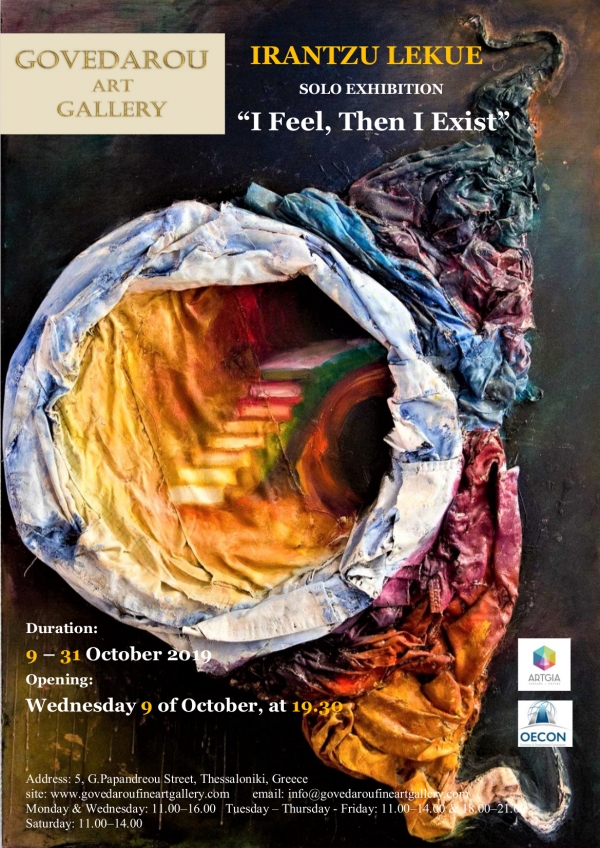 Irantzu Lekue works social art, conceptual art, activism and art accessible through artistic installations, video art, painting and sculpture. She has won the First Prize Videotalentos of the Santander Foundation, the First Prize photographic memories of the Canal Foundation or the Welcome Donostia 2016, among others.

Her works are characterized by their social awareness work. Through various techniques, she has produced works that analyze the condition of women, social injustices, climate change, life and death. During the last years she has influenced the demand and accessibility through art. In her artistic practice she has gone through different stages that have marked her work. It began with introspective works that reflected different stages such as cancer disease, identity crises, loneliness, bullying, death or sexual abuse.

Subsequently, her works have varied towards an increasingly social theme such as gender, racism, historical memory or socio-economic injustices, using art as a tool to activate thoughts around hegemonic and unfair situations in different social environments; all closely linked to social art. Her artistic installation works invite spectators to be part of them and to be able to interact with them, to promote participation, reflection and self-criticism. That is why the artist performs actions in the public space in order to provoke some kind of reaction in the public making the viewer a participant or part of her work. Her artistic practice has also led her to be denounced before the courts as was the case with the artistic occupation of the Krea Building in Vitoria-Gasteiz.

Her artistic installations are characterized by being composed of repetitions of everyday objects that are distributed through space, decontextualizing the object, resignifying it and allowing an infinity of readings. Irantzu Lekue was in charge of closing the Energy Waves program of the European Cultural Capital DSS2016 with the urban art installation “Aztarnak”. She made a huge fingerprint consisting of 10,000 glass bottles. Each bottle contained a message from citizens who wanted to participate in the work with desires for culture and art.

The Basque artist Irantzu Lekue and her team also perform murals on a large scale and also orders for companies or private homes, collaborative, participatory murals or artistic commissions to take art wherever it is necessary. Transformative muralism because it improves, brings art to the street and bets on urban rehabilitation from society. She wants to improve environments outside but also inside through the dynamics of citizen participation. Her last project has been done in Barcelona.