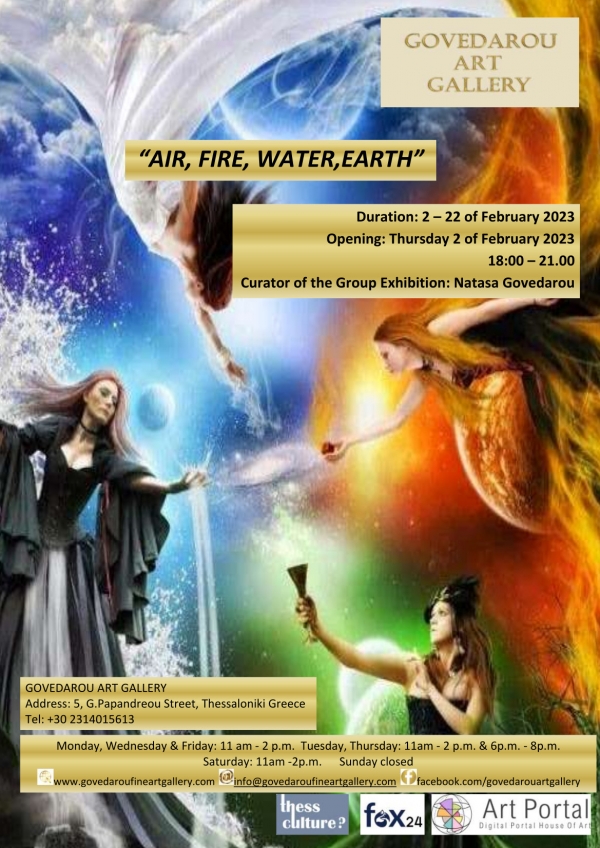 Natasa Govedarou, visual artist, curator and owner of Govedarou Art Gallery, organizes the group exhibition in the gallery space.The theme of this group exhibition is "Air, Fire, Water, Earth".The following text may facilitate the visual artist in the inspiration of the theme chosen for this exhibition.It is important to emphasize that this philosophy of the 4 elements of nature is found in all cultures deep in human history and is not limited only to the ancient Greeks.

The teaching and symbolism of the four elements is something that until recently caused laughter and ironic comments from researchers.Most people could not perceive the value of a symbology foreign to the logic of the 19th and 20th centuries, as rationalism had watered their minds.Allegories and symbolism for the 4 elements are found in numerous cultures throughout the earth.

According to the ontological theory of the four elements the whole world is fundamentally structured by four basic elements.From these, their interactions and mixtures are built all the material and immaterial, visible and invisible objects of the Universe.The four elements have the following names:

The terms refer to the corresponding physical concepts of fire, gases, water and earth, due to similar properties, but in reality these are supposed ontologically fundamental components of nature and not the familiar concepts of everyday life.