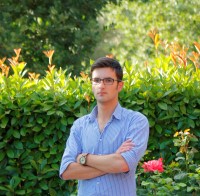 David Cassar is an impressionist artist born in Malta and living in Florence, Italy since 2010. During the final stint of his formative years he graduated with honors from the Russian Art Academy. At the Academy he devoted the bulk of his efforts to mastering the anatomical aspect of figure drawing while also focusing on well-founded principles of color in both landscape and portrait.

He gets his inspiration for his expression of drawing from the Masters of the Renaissance period while is influenced by prominent Russian and French Impressionist Artists in his use of color. His goal is to convey theme-based compositions; mainly historical events, philosophical ideas and the beauty in nature. When painting outdoors he focuses his aim on depicting a story set in a natural context by capturing a distinct moment in time. His portraits successfully highlight the various contours, within a scene, communicating the personality of the sitter elegantly and effectively.