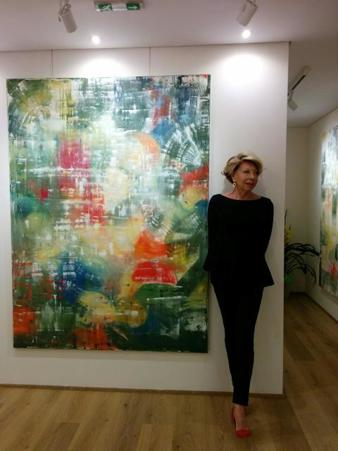 Nana Winter Georgiadou was born and raised in Hannover, Germany. He attended painting classes at the painter's workshop Wedekind and was involved in exhibitions of young artists from an early age. After her marriage she settled in Thessaloniki where she continues to paint. Her works are currently in Germany, Austria, England, France and Belgium.

2011 Municipal Gallery of the Municipality of Pylea - Chortiatis

1998 Participation in the exhibition of 12 painters from Thessaloniki at the Museum of Contemporary Art of Skopje under the auspices of the Greek Embassy.

Having completed a turnover from the 1980s to the mid-2000s, where the female figure dominated, Nana Winter - Georgiadou gradually moved on a new period in her painting with three sections of works that symbolize the interiors - her experiential experiences. The color in these three sections becomes a carrier of mental discharge. Diluted, transparent, with flashes of light, worked in an unusual way, by hand, and in rare cases with a brush, led her to the thematic release. The contact of the hands with the surface of the canvas acts as a direct way of transfusing moods, internal vibrations, but without them being diverted to impressions, let alone to brain inventions. The abstraction is already conceived in the first section with the birds flying. These works distinguished for the extreme austerity of the composition, the often three-part horizontal layout, the oligochromia. Disciplined expression intensifies the symbolism of the bird's flight, inviting the viewer to enter an ambiguous, sometimes threatening, sometimes friendly, charming in its vagueness.

In the next section of the abstraction, space is given to develop the color virtues that has the painter, in parallel with the gestural freedom and intensity, the expansive tendency properly served by large surfaces. It is noteworthy that no has been influenced by German expressionism, as one might assume due origin. To some extent it is related, without consciously seeking it, to French painting, mainly the Delaunay Orphism. Moving away from visual reality as well the overcoming of chromatic asceticism, we observe that new expressive ones open up horizons. The transcendence of the synthetic statics that characterized the previous period is crucial. The morphological language is now starring as a theme, color and form spread rhythmically. Curvilinear themes are broken by a variety of color bursts, motion and light prevail.

The return to expressive austerity takes place again in the third section of "Hugs". In an environment marked exclusively by monochrome, optics focuses on embracing forms, couples. Human bodies merge in an absolute blend, eliminating individuality. The choice of color in surrounding space each time refers to the creation of symbolic interactions with human presences, open to interpretive approaches, yet emphatically suggestive. As is the case, for example, in works where the couple emerges in abundant, glorious light or overshadowed by the threatening presence of a full-length or fragmentary dark figure. After ten solo exhibitions we find that the conditions have matured to the current one retro presentation to close and at the same time open the circle of her creativity Nana Winter - Georgiadou.