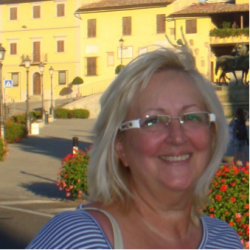 She is born in Thessaloniki in 1951. The artistic surrounding in which she grew up thanks to her mother, an experienced painter, was yet another motive for her need to contribute a piece of herself in art.

She was a founding member of the Association of Artists of Visual Arts in Kozani in 1965-66, taking part in all the events and exhibitions of its members. She had her superior studies at the Swiss Institute of Weder, in the Department of architecture for interiors and exteriors designers. She studied journalism in the E.K.E.S College and worked in the media for 19 years with many interesting missions in the European Union which were although not capable to drive her away from her great love, painting. She is also a member of the Association of professional Painters of Northern Greece and she continues her artistic activity promoting her romantic and realistic perspectives in painting. Her works are in many public buildings of Thessaloniki and in private collections.