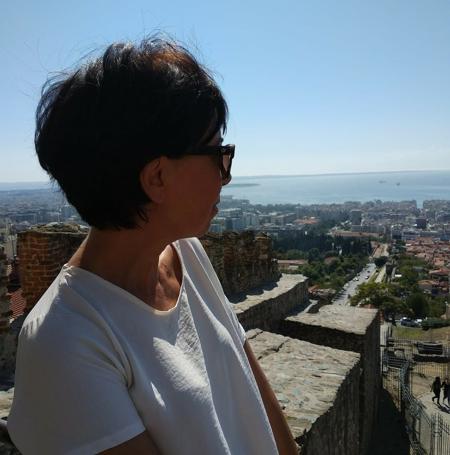 Theano Skaratou was born in Thessaloniki.

She studied at the Athens School of Fine Arts from 1979 to 1984. She studied painting in Tetsis's workshop and hagiography with Xinopoulos.

She is a member of the Association of Fine Arts Artists of Northern Greece.

1985 Cultural center of the Municipality of Kalamaria

2003 Municipal Art Gallery, "Woman as a subject of inspiration and as a creator"

2007 Peristyle of the Cinema- Theatre “Aristoteleion”

As a member of SKETBE she participated in many team exhibitions, in the Art Gallery of the Society for Macedonian Studies, at the French Institute, at the Kodra Camp, at the Capsis Hotel.

Her works are in private collections and in the Art Gallery of the Society for Macedonian Studies.

Nature, sometimes spontaneous and sometimes in dialogue with human intervention, is the constant "model" or motif in the new series of works by Theano Skarlatou: A silent cluster of trees or an enlarged detail of colorful foliage, or even the rough sea with a pier and a boat moored next to it. The meteoric light, a light sometimes soft, without sharp contrasts, and sometimes penetrating, a lightning that penetrates them and gives them something fantastic, is what gives life to the foliage and the branches or the waters that persist even in their splash in their peace. Color-to-color transitions seek harmony more than surprise. Nature, as depicted by the painter, has no elements of savagery. Behind the foliage, the branches and the trunks of its trees do not threaten the eyes of a beast or a human. The image invites we would rather say the viewer's gaze to stand on it with confidence, to enjoy the play of colors, to immerse themselves in the mystery of their reflections to win a break, a breath. Theanos's works want to be an opening, a different window that does not look at the smog that pollutes cities but suggests escaping to a post-realist elsewhere.

Its material is oil, worked in such a way as to give the image something of the softness of watercolor, and to allow a combination of precision and fluidity. Her work may have more to do with a post-impressionism that nurtures to capture some anecdotal aspects of the moment, rather than the various versions of expressionism, which seek to depict the once-stormy encounter of "nature within" with the external stimulus. However, the moment in her works acquires another dimension, because the linear time that characterizes it meets and intersects the circular of nature. Its landscapes are symbolic places. And this is because the painting imprint of nature is also the fingerprint of the painter and every landscape, no matter how objectively it records the outside world, is indirectly even a place of the soul.