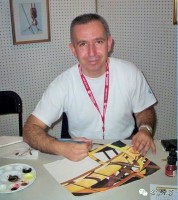 George Politis paints in watercolours and lives in Thessaloniki in Greece.

His paintings won many awards, including the “Commended Award in Watercolor”, “Best Watercolor” and “Best Mixed Media” at the International Juried Exhibitions, Australian Society of Miniature Art in Australia; the President’s Award , the Da Vinci Award and twice the “Award of Excellence” in the Arizona Watercolor Association Members Shows (2001, 2007, 2011).

George Politis was invited and participated in the 1st Watercolor Salon of Qingdao (China, 2014) and 1st Biennial of Watercolor of Qingdao (2015). One of his paintings is now in the collection of the Museum of Arts of Qingdao.

George Politis has served as juror in National and International watercolor exhibitions and he is the organizer and curator of the Thessaloniki Biennial of Watercolor (“Watercolor International - Greece”).

His paintings are featured in art books and catalogs.L'Aquarelliste, the Société Canadienne de l'Aquarelle's color magazine published one article on Miniature painting featuring some of his paintings, Spring 2000. International Artist published an article on his painting approach in 2001. Other articles and paintings have been published in The Artist, UK (2000, 2002), L’ Art de l’ Aquarelle (2012) and several other magazines. His work is featured in “Le Grand Livre de l’ Aquarelle” by Janine Gallizia.